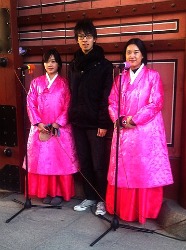 Traditional clothing is South Korea culture ... like many other countries with a rich cultural history, the Korean society tussles with the purpose and appeal of such wear and the comfort and fads of modern fashion.

Although there are direct lines that link national dress with its origins more than two thousand years ago, in many ways classical and time-honored attire is limited now to ceremonial and special occasions.

While there are some similarities between the traditional garments of men and women, there are also functional differences that respond to the culture and roles of the wearer.

One of the main pieces of women's wear is the Ch'ima, which is rectangular or even cylindrical skirt. The waistband is carefully pleated and worn high, being tied with long sashed above the breasts. Carrying the influence of the Confucian society, that had an enormous impact on Korea for centuries, the Ch'ima effectively hides most aspects of the female form. Compared to the modern fashion that is being worn by the young and trendy these days, the traditional garment was centred around the conservative social purpose then without the compromise in the practical role in accommodating squatting and other movement required to fulfill household chores. 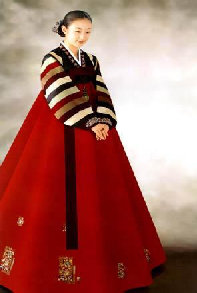 Similarly, the traditional garments of a man reflected an awareness of the demands of his role in the community.

The Paji, simplistically described as trousers, were originally designed with a narrow leg that complemented horse riding, but over time the realization that narrow legs made squatting in fields and sitting on floors very difficult led to the broadening of the legs into baggier, more comfortable designs.

Both men and women wore the jeogori or cheogori, which was a shirt-like although the men's was usually longer, extending down to the waist and even further in some cases. Like the women's version, this article of clothing was tied in front of the chest, although it was usually only the women who adorned the tied knot with an exceptionally large bow. 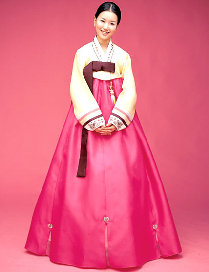 The development of education led to a need for clothing that would illicit appropriate response from others in the community. The Shimui was designed to be worn by the students when not working, almost as a casual aspect of their work. Even down to the name, "shim" meaning "to ponder or contemplate", the purpose of the Shimua was to maintain the aura of high ambition and deep thought of the students.

Modern Korea only brings these and other pieces of formal attire out for special occasions, but regardless of the purpose, there is still a place for and an appreciation of traditional clothing in Korea.

Clothing Back to South Korea Culture

Travelguide-South-Korea.com - Your One Stop Guide Copyright © All rights Reserved 2011-2012